July 25, 2020
This recipe for cinnamon quick bread is a keeper.  You are going to love it for the easy preparation, simple ingredients, and tasty flavor.
It makes a perfect pairing with your morning coffee or a tasty snack cake.  I'm confident once you make it you'll bake it over and over again. 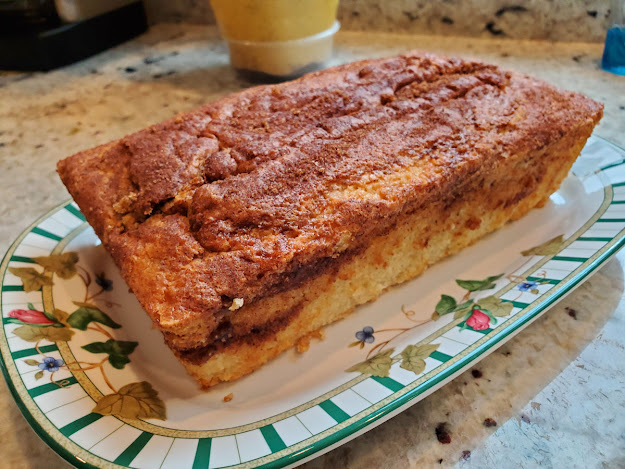 When I tell you this is simple and easy, I mean it.  I made this bread with my three-year-old granddaughter with success.  She loved eating it, too!

It will take you about ten minutes to mix the ingredients by hand and fifty minutes to bake in the oven.  If you want to make it as a fresh breakfast treat, assemble the ingredients the night before, have the pan greased and ready to go, and you'll be able to serve the warm bread in about 90 minutes.
I like to let this bread cool completely before cutting because it holds together best when cool.  The cinnamon bread is also delicious the next day so don't be afraid to bake it in advance.  Just wrap it well in plastic wrap to keep it moist and tasty. 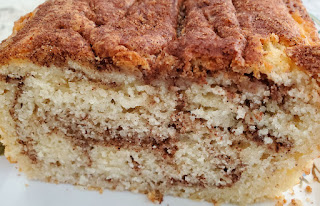 Directions
Preheat your oven to 350 degrees F.  Lightly grease a 9x5x2 inch loaf pan, set aside.
In a small bowl, mix together the brown sugar and cinnamon, set aside.
In a large bowl, mix together the flour, baking powder, salt, and granulated sugar.  Combine well.
In a separate bowl (I like to use a 2 cup glass measuring cup), mix together the milk, oil, and egg.  Beat this mixture with a fork to break up and combine the egg.  Pour this mixture into the flour mixture and stir to combine.
Spread half of the batter in the loaf pan.  Sprinkle with half of the cinnamon mixture.  Repeat with remaining batter and cinnamon mixture.
Draw a knife through the mixture both lengthwise and across to marble the cinnamon mixture throughout.
Bake for 50 minutes, or until a toothpick inserted in the center of the loaf comes out cleanly. Cool in the pan for 10 minutes and then completely on a wire wrack.  Wrap well in plastic wrap or foil.