April 18, 2016
I made this dark chocolate mousse cake for Hubby's birthday last week.  As my son tells it, cakes in the Just One Donna household follow a hierarchy.   Hierarchy actually refers to the cake's level of complication and overall decadence.


Lowest in the cake hierarchy are the boys' birthday cakes. Those cakes were usually a store-bought ice cream cake, which was always what they asked for. Next comes holiday cakes, which are usually selected from the list of family favorites.  At the top of the hierarchy is Hubby's birthday cake.  He has quite a sweet tooth and the cakes are usually carefully selected to surprise and delight his taste buds.

This dark chocolate mousse cake has been hanging out on my Let Me Eat Cake Pinterest Board.  It is a Bon Appetit recipe from 2001 which I think qualifies it for an oldie, but goody label.  Oldie, but goody, or not, this one decadent chocolate cake.

It is made in multiple steps and takes a few hours, but it really isn't hard to make.  The result is impressive, delicious and worth the effort.  Hubby said it was better than a very similar chocolate mousse cake he had had in a fancy, high-priced restaurant.  That was very nice and much appreciated praise.

As is usually the case, I made a few changes to the original mocha layer cake with chocolate rum cream filling recipe.  Make either recipe and you're sure to be delighted. 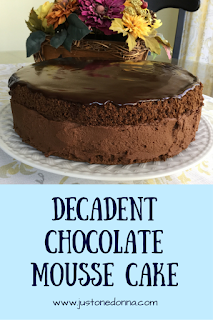 It was suggested that two layers of cake needed to be baked instead of the one layer as per the recipe. I wasn't at all concerned if there was too much filling, but I did go ahead and make two cake layers, just in case one was not enough.  In my opinion, after making this cake, both complaints are unjustified.  Only one layer of cake is required and the amount of cream filling is generous, but not too much.

Print Recipe
Makes one 9" round cake

Make the following changes to the original recipe:

Follow the original recipe as written, keeping in mind these tips for success:


This is a lovely dark chocolate mousse cake for a birthday or any special occasion.  It takes a little effort to make but is well worth the effort.  Your family and friends will be impressed and enjoy every bite.

January 11, 2018
Are you familiar with the term "hygge"?  It's a Danish term that has caught on in the U.S. because it speaks to the feelings of coziness and relaxation we seek during the winter months.  It emphasizes the simple things in life and the feelings of a life well-lived.  One of the ways I create hygge this time of year is by making sure my collection of African violets and orchids is happy and healthy. How to Care for African Violets and Orchids During Winter This post contains affiliate links.  We receive a small compensation when you shop with these links. Your houseplants are most likely crying out for some attention right now.  If you are like me, you ignored them a bit during the busy holidays.  After all the festive decorations are put away, it's time to give your plants a lovely spa treatment. Read on for tips on how to care for orchid plants and African violets in winter.
7 comments
Read more