Grilled Potatoes with Lemon and Onions

June 20, 2018
Do you have a recipe box?  I have been collecting recipes from a variety of sources for many, many years.  Those recipes are stashed in multiple places.  One of those places is a small metal file box that is overflowing with index cards, scraps of paper, and clippings from various magazines and newspapers. Today's grilled potatoes recipe is one of the recipe gems from the collection in my recipe box, just in time for the summer grilling season.


You'll love this favorite grilled potato recipe.  It is genius in its simplicity.  A little butter, onion, lemon, and chicken bouillon combine to make a delicious side for your next grilled dinner.

Do you have a recipe box like this?  In this modern day of recipe search via Google, it seems the practice of keeping recipes in a box is becoming a thing of the past.  Truth be told, this blog has replaced my recipe box as the place I store my tried and true favorite recipes.


The only time I use the recipe box these days is when I remember a recipe from the past that hasn't yet made its way to the blog.  I wish the box was better organized.  It's my own fault that it isn't and that the only organization is alphabetical dividers. 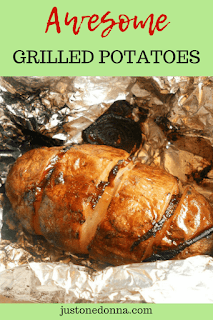 The dividers allow me to find a recipe for apple cake in the "A" section and banana bread in the "B" section.  Where is my recipe for Hot Fudge Pudding Cake?  Well, your guess is as good as mine.  It may be under "H" for Hot Fudge", or under "P" for pudding cake, or under "C" for cake.  It really depends on which word in the title of the recipe was most important to me at the time of filing.

Yesterday, I decided to flip through the box and came across this recipe for delicious grilled potatoes.  It has been a good many years since I made these potatoes and I was delighted to become reacquainted with them.  They make a terrific accompaniment to any of your summer grilled dinners.

Grilled Potatoes with Lemon and Onions

Scrub the skins of your potatoes.  Slice each potato into four sections, cutting deeply, but not all the way through the potato.  You want the potato to stay intact.

Melt the butter and bouillon together.  Add the lemon juice and stir to combine.

Tear off two pieces of aluminum foil, of equal size, for each potato.  Place one piece of foil on top of another.  Place a potato in the center.

Place one slice of onion between each slice of the potato.

Repeat with each potato.  Reserve about a tablespoon of the butter mixture for later.

Wrap each potato securely in the foil, sealing the edges so that the butter mixture won't leak out.  Place the potatoes on a preheated grill.  Put the cover down on the grill.   Cook the potatoes for 45-60 minutes, or until they are easily pierced with a fork.

Open each potato packet and baste with the remaining lemon butter.  Close the packets and set aside for at least five minutes.  I like these potatoes best when they have cooled down a bit.