January 21, 2011
My nana made bread.  Not just any bread, mind you.  She made anadama bread.  "Never heard of it", you say.  Well, anadama bread is a traditional New England bread made with white flour, cornmeal, and molasses that tastes divine.  Yes, it's divine.

The origin of the name, as Nana told me, had something to do with a man being angry with his wife, Anna.  As he ate the bread she made from flour, molasses, cornmeal, and yeast he cursed her saying, "Anna, damn her."

This seems like a plausible story, right? A quick search on the internet revealed multiple versions of this same explanation.  So, we'll go with it.

I remember Nana making her anadama bread completely by hand.  She used a large mixing bowl, a wooden spoon, and her hands.  No KitchenAid mixer for her.  I can picture her standing at her kitchen counter kneading away. She baked the bread in a large, wood-fired, cast iron kitchen stove.   How wonderful her kitchen smelled!

I'm on a self-imposed quest to conquer yeast in 2011.  I've lived in fear of all recipes with yeast for many years.  It's time for me to get the upper hand.  What better place to start than with a recipe that holds such fond memories as anadama bread.

First, I needed to track down the recipe.  I called my mom to ask if she had it.  Yes, of course, she did.   The recipe is short and sweet. 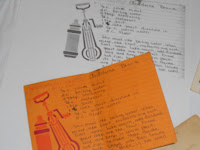 Directions
Stir cornmeal into boiling water.  When mixed, add shortening, molasses, and salt.  Cool.  When lukewarm add dissolved yeast and the flour.  Knead well and keep in a warm place.  Let rise until more than double in bulk.  Shape into two loaves and let rise again.  Bake in a hot oven, 350 degrees for one hour.

Well, it looked simple enough.  So, I assembled the ingredients.  After consulting with Mom, I decided to use Crisco for the shortening because we thought Nana was likely to have used it.  I wanted to replicate the exact flavor of the bread I remembered. 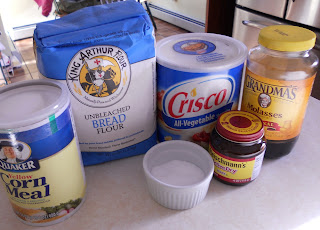 I heated  2 cups of water on the stove and stirred in the 1/2 cup of cornmeal.  I then added the shortening, molasses, and salt.  I left the mixture to cool for a little over an hour.  I checked the temperature of the mixture and it was about 90°.

It was then time to transfer the mixture to the bowl of my KitchenAid mixer with  2-1/4 tsp of active dry yeast (instead of cake yeast) dissolved in 1/2 cup of slightly warm water, approximately 90°, and about 3 cups of flour.  Using the paddle attachment, I mixed for about 2 minutes.
Time to try kneading by hand.  The remaining 2 cups of flour were used as bench flour on my counter.  I scraped the very sticky dough onto the counter for kneading. 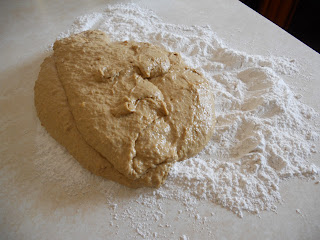 The recipe said to knead well.  Not knowing how long that would be, I consulted other online recipes which indicated approximately 10 minutes of kneading would be appropriate.  I set the timer for 10 minutes and started kneading.
I pushed the dough.  I folded the dough.  I pushed and folded the dough for 10 minutes.
I created quite a mess as well.  I'm not sharing pictures of the mess.  Sorry.
I transferred the dough to a greased bowl and covered it with plastic wrap.  I left it on the counter to rise to double its bulk.  That took about 90 minutes.  Then I carefully deflated the dough, divided it in half, and placed it in two greased loaf pans.  I covered them with plastic wrap and left them to rise to double in bulk.  That took another 90 minutes.

The loaves baked in a 350°F oven for 50 minutes, not the hour indicated by the recipe.  The loaves looked firm and brown.  I had seen a bread baking demonstration by America's Test Kitchen.com/)  in which it was said bread should come out of the oven at 190 degrees.  I used my instant-read thermometer to check the temperature of my loaves and they were at 195 degrees, so out they came. 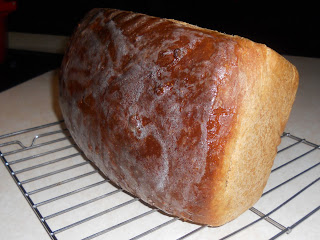 I rubbed butter on the top crust and set each loaf on its side on a rack to cool.  Looking good so far...
Now, I'd like to tell you that I let the bread cool completely before slicing, but that would be a lie.  I let it cool for about 10 minutes and then couldn't wait a moment more!
Drum roll, please... 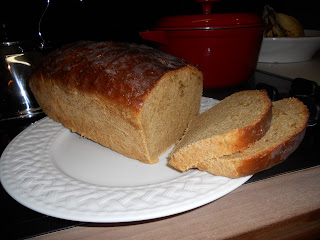 The big reveal...Yes, the anadama bread was delicious.  The texture was good and the flavor was like I remembered.  Was it as good as Nana's?  No...but, I'll keep trying.
Click the link to get the printable Ananadama Bread recipe.
Still fearful of yeast,