March 10, 2011
I try very hard not to do stupid stuff.  Some, my siblings for example, might chalk that up to me trying to be "Little Miss Perfect".  Others might call me risk averse.  I call it prudent time management.  After all, stupid stuff usually ends with some kind of trouble.  At a minimum it can mean I may have to do something over, or clean something up, or get something fixed...you know what I mean.

Well, lately I've done a couple of stupid stuff things.  I know, it's hard to believe.  But these stupid things weren't all my fault.  No, blame can be shared.

For example there was the incident of the attacking mailbox.  You may want to watch out because you probably have one where you live.  Mine looked like this...

And my car mirror will never be the same.  It needs to be fixed...someday...sometime...when I get around to it...soon.


Then there is the case of the attacking parking lot ice. 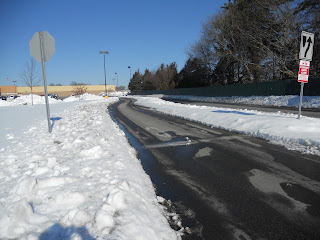 You remember, the Walmart parking lot incident which resulted in a very flat tire, time lost waiting for roadside service and a $458 repair bill. 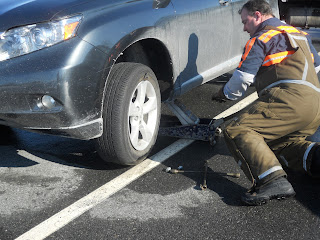 This week's stupid stuff involved a double oven in my kitchen with a mind of its own. It somehow turned on the bottom oven at 400 degrees instead of the top oven where potatoes were waiting to be baked.  This would have been fine except the bottom oven was filled with boxes of crackers and cereal and a plastic container of nuts.  I had been to a wholesale club this week.  There was also a plastic case containing my brand new electric knife.

Notice my use of the word "was".  After much smoke, melting of plastic and one burning box, my bottom oven is now free and clear of all items that had no business being there in the first place.  I have no pictures to share of the smoke, burning box or melted plastic.  I was kind of busy...


It was really a minor incident...no firemen were required...windows and doors were thrown open, melted plastic was scraped off the oven, everything from the oven was trashed and clean up took a mere 30 minutes.

Stupid stuff should be avoided at all costs.

No good can come from it.

All you get is a bunch of wasted time and a huge serving of humble pie.

January 29, 2020
Crunchy, spicy, and yummy are all words used to describe a good gingersnap cookie.   While my hands-down, favorite cookie is a gooey chocolate chip cookie I occasionally crave a spice cookie, like gingersnaps or  this molasses cookie .  This gingersnap cookie is a winner.  It's easy to make and will be a favorite in your recipe rotation. Traditional Gingersnap Cookie Recipe ( This post contains affiliate links.  I will be compensated when you make a purchase with these links.) Gingersnaps Cookies In the U.S., gingersnaps are usually drop cookies with lots of cracks on the surface.  That's exactly how I like them.  Those found in other countries may be thinner and sliced.  The Lebkuchen, a traditional German cookie, and the pepparkakor, from Sweden, are often cut into festive shapes.  My gingersnaps are round. These gingersnaps are tasty cookies at any time of the year.  Their spiciness is perfect as a holiday cookie, as well, so go ahead and add them to your holi
Post a Comment
Read more

November 16, 2011
How many of you watch America's Test Kitchen shows on your local PBS station?  Show of hands, please.  Well, those of you who don't have your hands raised really should check your local TV listings and catch one of the shows soon.  The programs are full of ideas and tips, like this suggestion that you can make a better pie dough using vodka as one of the ingredients.  I know, sounds crazy doesn't it? Vodka Pie Dough Pie dough is not my thing.  No, not at all.  Yes, I've been known to purchase the prepared pie dough from my local grocery store.  No, I'm not ashamed to admit it, and neither should you be.  My mom, keeps telling me that making pie dough is easy.  Yes, easy as pie.  Well, I'm finally willing to tackle the art of making pie dough.  I actually started about a year ago.  I selected different dough recipes, made some pies and compared the crust results.  I had no clear winner with my first attempt at the experiment, so I'm ready to start again.
Post a Comment
Read more

December 12, 2016
A Delicious Old-Fashioned Date Cookie I'm always on the lookout for a "new-to-me" cookie recipe.  One day when chatting about favorite cookie recipes with my mom and dad, Dad raved about a date-filled cookie he remembered from his childhood.  It was one of his favorite recipes my nana made for her family.  Mom dug through her recipe collection and was able to find a recipe for the cookies. Old Fashioned Date-Filled Cookies The recipe card attributed the recipe to Edith Hoar, one of the ladies from Grand Lake Stream, Maine, the small town where Dad was raised.  The recipe directions made me laugh.  Like many vintage recipes from the time, this recipe for date-filled cookies was customarily ambiguous. It read: Cream: 2 cups sugar, 1 cup shortening Add:  1 cup milk, 2 eggs, 6 level teaspoons baking powder, 2 teaspoons vanilla, flour enough to roll. Filling: Stir 2 packages dates, 2/3 cups sugar, 2 teaspoons flour, 2 cups water. Cook together until smooth
15 comments
Read more

February 01, 2018
Have you ever had a whoopie pie?  Whoopie pies are a quintessential New England dessert and a memorable treat from my childhood.   My mom would make them for us every once in a while.  Oh, what a treat to come home from school to a platter of chocolate whoopie pies!  Yum! Today I'm sharing my recipe for the best ever whoopie pies. Amazing Whoopie Pies to Delight Your Family Whoopie Pies Debate rages about where whoopie pies originated.  Some say these goodies originated in New England, others say they originated with the Amish.   There is also debate about what ingredients should be in the filling.  Many recipes suggest a mixture of sugar, butter, and Marshmallow Fluff, but that is not the filling I prefer.  The whoopie pie of my childhood is a traditional Maine whoopie pie recipe, made with a cooked flour and milk mixture added to sugar and shortening for the filling.  Try it and you'll love it, too.
1 comment
Read more

April 10, 2017
As the weather warms and you start to think about gathering friends and family for parties and celebrations you'll want to think about signature cocktails. This rum punch cocktail is an ideal cocktail for a large gathering. Don't you think a warm-weather cocktail should make imagine yourself sitting by the shore with your toes in the sand? Rum punch is one of those cocktails.  Cool and fruity, rum punch will make a party! One sip and you'll be transported to the beach. Rum Punch Cocktail (This post contains affiliate links for your shopping convenience.  When you make a purchase using these links you help support this blog.) Rum Punch for a Party! This rum punch recipe is a make-ahead recipe I use whenever we are having a large group for a summer picnic or barbecue.  Use the recipe below as your baseline and double or triple the ingredients as needed. You'll need a large container for storage and room enough in your refrigerator to keep it cool.  My fa
5 comments
Read more